ARABIAN MARKETER: What will it take to challenge Google and Facebook?

In July 2016, Verizon announced it’s purchase of Yahoo! while we were on holiday in Normandy. I received an email asking if I have an opinion. Sure I have an opinion. Below are the answers to the questions that Sana Mahmoud, Group Editor, The Arabian Marketer, put to me. At the bottom is a link to the final article quoting some far more erudite people than me! 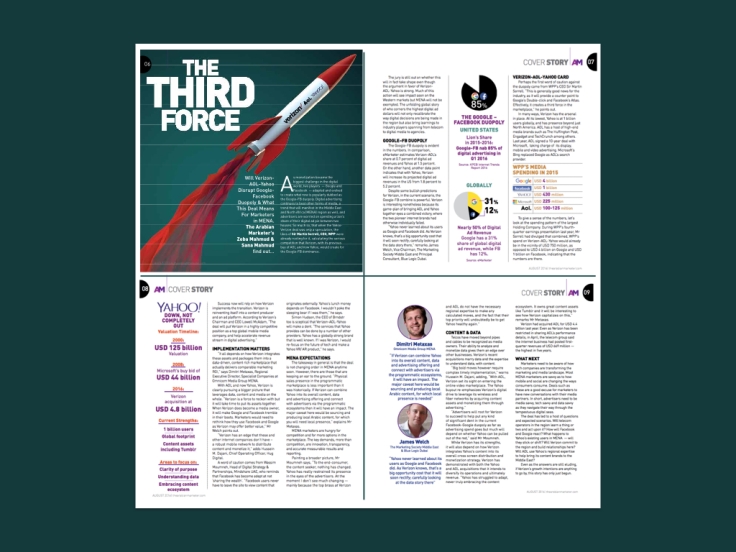 1. US based telco, Verizon, has followed up its AOL buyout earlier in the year with now Yahoo, reiterating its focus on content platforms. Much has been deliberated on the significance of owning content platforms – do you see this agreed buyout augments Verizon’s content play globally?

Telcos used to be about pipes and cables. Now they are quickly becoming recognised as important media owners. Verizon – the USA’s largest mobile operator – is collecting some interesting media brands: Huffington Post, AOL, Yahoo. The next six months, as the deal is closed between Yahoo and Verizon a lot will come to light.

Verizon engaging its users and collecting audience data to engage those users with relevant, new content. And thereafter monetise that content through data. Telcos are more used to analysing and monetising data more than many businesses.

2. Verizon does not have any MENA play and Yahoo had recently restrained its own presence in the region too. Do you see the deal impact the MENA media and advertising landscape in the near future?

MENA brands, telcos and media owners can learn a lot from the big US players. And they can learn from their mistakes. Yahoo has been flailing and failing over a ten year period. It was at its peak in 2000. Sixteen years later, it’s a shadow of its former self but it’s still a brand that everyone knows and many use… Marissa Mayer came in too late – just four years ago – to save the business, but maybe this last deal will save the brand. While many will blame her, she’s not the cause of the problem.

3. The deal is also one of the lowest tech deals of its nature at USD 4.8 billion. Where did Yahoo go wrong in continuing to grow its proposition?

Where did Yahoo go wrong? Simple: no-one ever knew just what Yahoo is about. Is it email, search or entertainment? Pundits say that it lacked clarity of purpose. For example, Mayer introduced Katie Couric, the veteran TV host, but it felt like a token gesture to becoming an entertainment brand.

What’s more, apparently Yahoo never learned as much about its users as Google and Facebook. As Verizon knows, that’s a big opportunity cost that it will soon rectify.

4. As an industry, what are some of the learnings that tech companies, agencies and media companies can take from Yahoo over the years, more significantly in the time up to the sell out?

There is one simple learning from the demise of Yahoo: like Facebook and Google, all businesses today need to host and monitor content to see what engages their audiences and to be single minded in monitoring and monetising that audience data.

5. Globally, Yahoo is all set to transition to AOL, and the digital advertising option this can create is expected to be a third option to the likes of Google and Yahoo globally – do you see this happening?

Verizon is a force to be reckoned with, but it’ll take time to put their assets together. I don’t think Google and Facebook will be trembling in their boots. Not yet.

6. As a marketing professional in MENA, what about this deal would you watch out for?

All marketers need to be aware of how tech companies are transforming the marketing and media landscape. Most MENA marketers are very savvy as to how mobile and social are changing the ways consumers consume. But it’s hard to keep up with all the consolidations, mergers and acquisitions that are part of today’s tech world.

This changing landscape should change the conversations that marketers are having with their media agencies. Marketers and advertisers need to be really media savvy as they navigate their way through the digital sea of change.

The final article appeared in The Arabian Marketer in the August 2016 print edition. A full transcript can be found at this link: http://arabianmarketer.ae/rise-of-a-third-force-in-the-digital-advtg-world/

James Welch is a business transformation consultant who wants to share his love for data-driven communications. He's worked in agencies and consultancies across the globe while enjoying the surf (cyber and real) in Sydney, while eating many a chili crab in Singapore, and then Dubai, there he was building the ORCHESTRA. He's now relocated, en famille, to the UK. Started at www.whybuy.app in Nov 2020. Contact him here: jamwel (at) me.com