Yes, we ALL should be mocking generic advertising

Dissolve is a library of stock footage for video.

They saw this piece by Kendra Eash on Timothy McSweeney’s Internet Tendency site.

And made it into a film. (HatTip Mumbrella.asia)

Another way to mock generic advertising was taken by David Mitchell in 2009.

In 2006 I was on a project at Patts Y&R in Melbourne. The now-famous Russel Howcroft had just been appointed as MD. The receptionist asked me what project I was working on. I explained that I was working for Russel and, with a senior account director called Tobi, helping them articulate today’s stories for the agency and to find ways to package them up and disseminate them to prospective clients. The receptionist’s summary was succinct:

I use that line nowadays when people ask me what I am doing for a living. But in reality, we all know an advertising agency seldom advertises itself. Not in the traditional sense of paid advertising.

When it comes to the paid-owned-earned media debate, agencies just don’t pay for advertising space. Hell, we’re bad enough with our owned media (how many out-of-date websites are there and/or offices ‘soon to be renovated’). And few agencies are fabulous at sparking the conversation in earned media (what percentage of agencies goes beyond PR-ing breaking campaigns, updating a Linkedin profile and the occasional tweets?). But this piece isn’t about owned and earned media, not today.

Well, we’ve all thought about our own advertising and debated it. And this came up again recently:

I found out the other day that Encore magazine is about to be revamped and, on top of its usual readership, it’ll be distributed among the 4,500 senior marketers on the Australian Marketing Institute’s database. And I bet the All-New Encore Magazine will enjoy heavy promotion to an even wider marketing community via its sister title, mumbrella.

And so I spoke to the Encore publishing team and was duly sent the media pack with the rate card.

As it happens Innocean, the agency where I work, will feature since another now-famous adman, Sean Cummins, will scrutinise our latest TV ad for Kia, part of a multimedia campaign for an irreverent brand.

Here lies the debate. Should we also advertise in the publication? Well, it’s too late now, we’ve missed the deadline. So, should we have advertised? And what would should have been our message?

My immediate reaction was YES, let’s advertise. A resounding YES. What’s more, I had a brilliant idea for the ad. Creatives all cringe when ‘suits’ get ideas for advertising executions. Especially when the suit says it’s brilliant! And so they should – here’s what I created on my (t)rusty old mac: 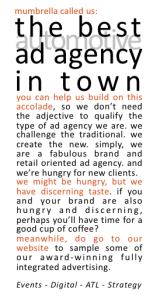 My objection to running ads like this is END_OF_DOCUMENT_TOKEN_TO_BE_REPLACED

#datadriveseverything – but not at Qantas

In an earlier post I outlined the three steps to success in communications: Content, Targeting, Distribution. One conclusion was that in the world of targeting and beyond, #datadriveseverything. It seems that targeting is something that Qantas needs to spend more time analysing:

Over at the mumbrella news & opinion website, Tim Burrowes flags that Qantas is spamming it’s database with scary stories (my words not his. For his words click here.)

This looks like a good example of a company that is only just starting to understand the opportunity provided data-driven communications.

Open communications, great. Poor use of database though.